Alaskan Awarded for Work in Afghanistan

Subject: News of The Commander of Unit (AKNG 297th) we all support in Afghanistan

This unit has been looked after throughout the last 8 months by ASA (Americans Supporting Americans), through ALR ( American Legion Riders) Post 36, Tucson, AZ, holiday morale... Rich and his HAM Radio Operators Group in AK who send frequent care packages, The Fisheries, who collectively provided delicious salmon from home, particularly Global Seafoods' Winston Gillies, who contacted Wasilla Mayor to have an official Adoption. This was completed in April of 2007, HOOAH WINSTON ! Thank you everyone for supporting the troops, even one unit at a time. 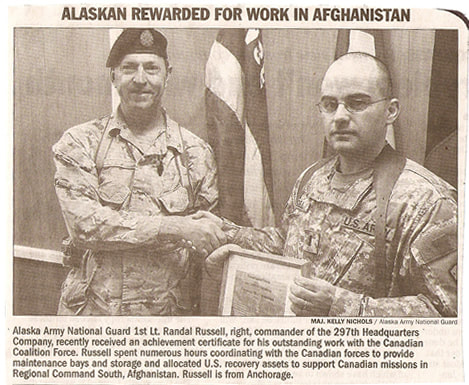